Viewing post categorized under: Urban One In The News

Urban One launched its new initiative, REPRESENT.™ Men’s Health, with a live watch party of TV One’s new docu-series, “We’re the Campbells,” on Tuesday, June 19, 2018.  The event was hosted at the City of Praise Family Ministries in Landover, Maryland, by Radio One’s D.C. market radio stations, Praise 104.1 and WMMJ 102.3/92.7.  Hundreds of […]

Greetings, On behalf of our Urban One family, it is my pleasure to announce the launch of our REPRESENT. Men’s Health initiative.  The REPRESENT. campaign was developed by my mother and business partner, Cathy Hughes.  It is a quarterly initiative whereby all of the Urban One radio stations and Divisions work collaboratively in support of […] 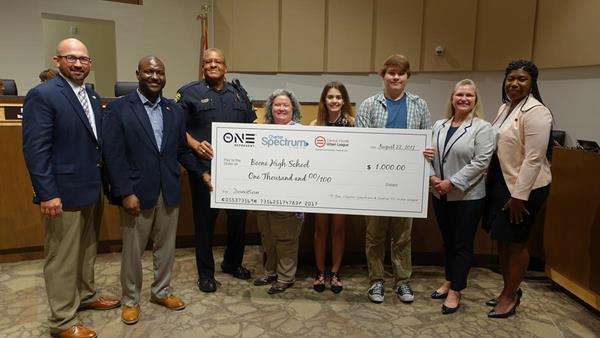 Orlando, Fla., Aug. 24, 2017 (GLOBE NEWSWIRE) — ORLANDO, FLA. – AUGUST 24, 2017 – TV One and Charter Communications announced Boone High School in Orlando as the inaugural winner of the “Empowerment Through Literacy” Video Challenge. Combining the themes #AWorldWithout, TV One’s current marketing campaign and “Empowerment Through Literacy,” from Charter, this contest is a […]

iOne News, Urban One In The News 0

Via: Forbes.com By:  Candace McDuffie , Contributor Jamilah Lemieux is known for amplifying the voices of black millennials from across the U.S. “I enjoy doing work that I think my people can appreciate,” says the 32-year-old. “I enjoy being around my people. That’s not saying I don’t want other people to read or engage with […]

TV One News, Urban One In The News 0

Via:  Deeniemedia.com By:  Nadine Matthews Thirty-five years after starting out and eighteen years after going public, multimedia brand Radio One recently announced it has changed its name to Urban One. As stated in a press release from the company, “Urban One is the only multimedia company reaching 82 percent of Black America. Its diverse audience […]